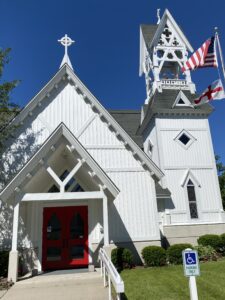 St. Paul’s, the oldest Episcopal church in the region around Grand Traverse Bay, was founded on 29 August 1867, as the Church of the Covenant, under the direction of the Rev. Henry Brown of Alpena.

In 1869, the Rev. Albert Lewis came to Elk Rapids as Rector; and, for 11 years, we held services in the county courtroom and he traveled a circuit around Grand Traverse Bay by steamer. Renamed St. Paul’s, the parish was admitted in union with the Diocese of Western Michigan on 7 June 1871.

In 1880, land was donated for a church building and work began on the present structure. Services have been held here continuously since Bishop George Gillespie conducted the first ones on 21 June 1885.

A letter from 1954 details how plaster falling from the ceiling the Sanctuary ended up being a blessing for the church.

An interesting bit of history is the 1964 Proposed Budget. When compared to the 2022 Budget, the reality is that things haven’t changed that much (when adjusted for inflation).

In 1967, the parish celebrated its 100-year anniversary. It is interesting to see how the parish’s history was communicated during that year of celebration.

The handsome whiteboard and batten structure is an exemplary expression of American Gothic church architecture. The church’s style and character were carefully preserved when the building was extensively remodeled in 1995 (including installation of an elevator for all-abilities access to the building). 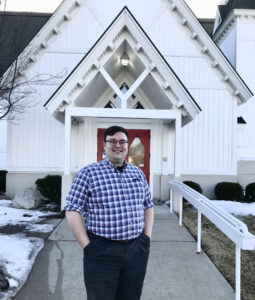