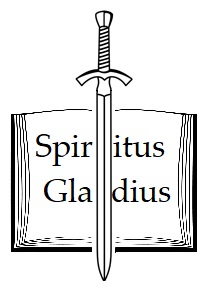 The traditional symbol of St. Paul includes a book with a sword laying over it and the Latin inscription “Spiritus Gladius” or “Spirit Sword.” This symbol can be found in a window in the Narthex, by the bell tower rope, just before entering the Sanctuary. 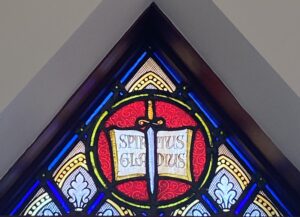 Adapted from The Episcopal Church’s Glossary:

Saint Paul (Hebrew Name: שָׁאוּל (Sha’ul) / Latin Name: Paulus / Greek Name: Παῦλος (Paulos)) died in approximately 64 CE. Known as the Apostle to the Gentiles, he was the author of several Second Testament epistles (open letters) written to churches throughout the Mediterranean region. He was a preeminent Christian missionary and founded many churches in the region. He was a Jew of the Diaspora (that is, he was born, and lived, outside of Israel), a member of the tribe of Benjamin, and a native of Tarsus in Cilicia (modern day Turkey). He spoke, and wrote in, Greek; further, the version of the Jewish Bible that he worked with is the Greek translation known as the Septuagint rather than a Hebrew version. According to the Book of Acts, Saul held Roman citizenship from birth and his trade was tent-making. He was trained in rhetoric; and, the Book of Acts (22:3) states that he was educated in Jerusalem at the feet of Gamaliel, a Pharisaic member of the Jewish Sanhedrin (this, however, may not be factually accurate as Paul’s writings do not reflect his having been instructed by Gamaliel).

Saul was a zealous Pharisee and a persecutor of the Christian Church (Gal 1:13, 1 Cor 15:9, Phil 3:6). He was present and approving when St. Stephen was martyred (Acts 7:58). After Stephen’s death, Saul “ravaged” the Church by dragging off men and women to prison (Acts 8:3). He went to Damascus with authority from the Sanhedrin to persecute the Christian Church; but, after the Risen Jesus appeared to him, he accepted Christ as the Son of God and Savior of the World on the way (Acts 9:1-22). Saul’s epiphany experience has been dated to about 34 CE. The Book of Acts recounts that a light from Heaven flashed around Saul and he heard the voice of Jesus asking, “Why do you persecute me?” He viewed this experience as authority for his apostolic ministry (Gal 1:15-17). Saul was then without sight for a time after this vision; and, he was led to Damascus by those who were with him. The disciple Ananias was then directed by a vision to Baptize Saul. Ananias, though, was reluctant to Baptize Saul; but, the Lord told him that he had chosen Saul to bring His name, “before Gentiles and kings and before the people of Israel.” The Epiphany of St. Paul the Apostle is celebrated on Jan. 25 on the Episcopal calendar of holy days.

After Baptism, Saul confounded other Jews in Damascus (and wherever he travelled) by teaching in the synagogue that Jesus was the Messiah. This did not make Saul particularly welcome in these gatherings. At first, he was also unwelcome to the followers of Jesus because they feared that he was still their persecutor (as he had been for quite some time). St. Barnabas, though, brought him to the Apostles and described Saul’s epiphany experience (Acts 9:26-27). Saul was then accepted as a Christian disciple. Saul and Barnabas were subsequently commissioned by the church in Antioch for missionary work. Barnabas and Saul set off upon what was to be the first of Paul’s three missionary journeys and it was from the time of this first missionary journey that Saul began to go by Paul (the Latin/Greek equivalent of his Hebrew name). He founded churches in Asia Minor and Greece and he wrote public letters, also known as epistles, to these churches that were then collected, after Paul’s death, preserved, edited, and distributed as the first documents of the Second Testament (the gospels, and other Second Testament Books, were written later). Paul was accompanied on his second missionary journey by Silas (Silvanus) and, later, Timothy. Paul and Barnabas eventually went separate ways because Barnabas wanted to take John (Mark) with them; but, Paul felt that Mark had deserted them in Pamphylia on the first missionary journey (Acts 15:36-40, 16:3). In total, Paul made three missionary journeys (Acts 13-14, 15:40-18:22, 18:23-21:17).

Paul went to Jerusalem at the end of his third missionary journey despite warnings about what might happen to him. Paul was arrested by the Roman tribune after a riot broke out over Paul’s presence in Jerusalem. He was transferred to Caesarea where he was held for two years. When a new governor was going to return Paul to Jerusalem for trial, he appealed to the emperor and was transferred to Rome. He was shipwrecked at Malta; but, he eventually did arrive safely in Rome. Although no stranger to being imprisoned, this time Paul was allowed to live under house arrest for two years (with the soldier who was guarding him). During that time, Paul proclaimed Jesus Christ as the Messiah to the Jews in Rome and some were convinced by him; but, most others refused to believe. There is no mention of Paul’s death in the Book of Acts; Paul is believed to have been martyred in Rome, under the Emperor Nero, around 64 CE.

Paul’s epistles to the communities following the Risen Christ represent a significant portion of the Second Testament. His letters are primary sources for understanding his career and ministry; although the Book of Acts can be a compliment to these letters, there are significant contradictions between the letters written directly by Paul and the author of Luke-Acts (for these two Books, Luke and Acts, are actually a single book split up into two sections).

Most scholars acknowledge that Paul authored Romans, 1 and 2 Corinthians, Galatians, 1 Thessalonians, Philippians, Colossians, and Philemon. Traditionally, it was thought that Paul also authored 2 Thessalonians, Ephesians, 1 and 2 Timothy, and Titus; however, modern scholarship suggests that these may have been more likely written by disciples in communities founded by Paul, in Paul’s name, after his death. Evidence for this includes variations in style, themes, vocabulary, and theology. Some variations in style may be explained by the fact that secretaries assisted Paul in physically writing these epistles; but, that is not enough to explain all of the differences between the authentic letters of Paul and these disputed letters. Paul’s theology emphasized the importance of salvation though faith in Christ rather than through the Jewish Law; Paul, the Jewish Apostle to the Gentiles, resisted the requirement that Gentile converts be first subjected to the Jewish Law (see Phil 3:2-11). Specifically, Paul and Barnabas influenced the Apostles, and elders, in Jerusalem, not to require circumcision of male Gentile converts to Christianity (Acts 15:1-29; Gal 2:1-10). Paul also rebuked St. Peter when Peter would not eat with Gentiles (Gal 2:11-14). Paul urged that, “we know that a person is [righteoused] not by works of the Law but through faith in Jesus Christ” (Gal 2:16). Paul provoked the outrage of Jewish authorities against him; and, his teaching influenced the early separation of the Church from Judaism.

Paul’s writings have been foundational for Christian theology broadly; but, specifically, Paul influenced the areas of: salvation, the Christ, the Church, the Spirit, and the end times. In fact, Paul’s thoughts have been the bedrock of Christian teaching. Paul’s influence is visible throughout the Tradition of Christianity and can be seen in the writings of: Augustine, Aquinas, Martin Luther, and John Calvin (just to name a few). The feast of Saint Peter and Saint Paul, Apostles, is celebrated on 29 June each year. 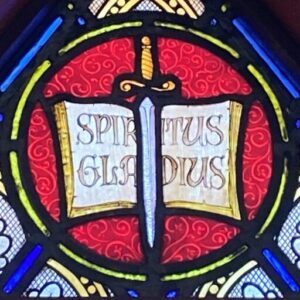